Norwegian settlement and the "capital" of Svalbard. Named after the American Jon Munroe Longyear who started the first mine in Longyear valley in 1906. It was bought by a Norwegian mine company in 1916. Today the town is a modern town with every "civilised" facility you can imagine. The population is app. 1600 and increasing. So far Longyearbyen has focused on mining, but now science and tourism are just as important. After breakfast, we checked out. After a little briefing at the hotel before we embarked the MS Nordstjernen at 12:00 and the Spitsbergen Adventure Cruise started. The ship sailed out of Adventfjorden and west towards Barentsburg. Barentsburg is currently the only Russian settlement on Svalbard - there used to be two more: Grumant which closed down in the 1960's and Pyramide which closed down in 1998. Barentsburg is a mining settlement on the east side of Grønfjorden. The first house was built in 1912 by a Norwegian company and then sold to a Dutch company; The N.V. Nederlandsche Spitsbergen Companie. It was bought by the Russians - from the Dutch - in 1932. In Barentsburg there are currently app. 950 inhabitants - out of which around 200 are women and 50 are children. We joined a guided tour with an "English speaking" Russian guide. The town looks old and grey, but people in Barentsburg are lucky - compared with the alternative back in Russia. This is one of the most well known fjords on Spitsbergen and also one of the few places where large cruise ships are able to anchor up. It is a lovely fjord witch pointed mountain peaks. These are said to be the mountains Wilhelm Barents first saw when he discovered Svalbard in 1596 and named the biggest island Spitsbergen (Peaky mountains) after them. Entering the fjord a peninsula reaches out on the south side. The outer part of the peninsula is a small hill. This is Gravneset where Dutch whalers from NW Spitsbergen came to bury their dead in the 17th and 18th century. Stone gatherings and wooden coffins remain from the graves and there are hundreds of them. Further down on the beach remains from two blubber ovens are found. This is where blubber from whales was melted. In the end of the beach lies a small cabin where Sysselmannen has two park rangers on duty during the summer - one of them was quite talk active and told us a little about his job. Taking a close look on the Waggonyway glacier is recommendable. It is rather small but very active and often calves of ice. On the Northwest corner of Spitsbergen you will find Virgohamna - a well protected natural harbour. This is the place where the Swedish explorer, Salomon August Andrée, started his expedition towards the north pole with a hydrogen-balloon called Örnen in 1897. The expedition failed as Andrée and his two partners - Strindberg and Fraenkel - crashed onto the polar ice. They tried to walk back and ended up on Kvitöya where they were found dead 30 years later. The place is well protected from winds and there is a air of mystique over the area. In Virgohamna you will find some of the things Andrée brought. Barrels for sulphuric acid, iron-pieces and oven used for mixing it in order to produce hydrogen gas for the balloon. The lumber he used to build a shelter and the balloon-house is still there (moved from its original spot by a later expedition, Wellman 1906) and even pieces from the cloth he used for the balloon. The monument on the northern part of the land, next to where the balloon-house stood, was built by the crew of a Swedish naval ship, called Älvsnabben, to honour Andrée. In the west part of the bay you can see the remains from the Wellman expedition. An American who tried to fly to the north pole with an airship.

Cruising along the edge of the drift ice, looking for wildlife. We saw a very sleepy walrus with only one tusk, taking it easy on the ice - and during the day we were also fortunate to see some minky wales and a couple of seals. Northeast of Virgohamna on the flat area on Amsterdamøya we found Smeerenburg - the name come from the Dutch whaling period. When people first came to Svalbard (the Dutch explorer Wilhelm Barents) it was in order to find the Northeast passage to China and Southeast Asia. But instead he found Svalbard with fjords housing incredible amounts of whales. During the 17th and 18th century hundreds of ships came to NW Spitsbergen to catch whales. It is said that this was the spot where most whales were caught. According to history and excavations a whole village was built here and the name was Smeerenburg (meaning Blubber Town). Estimated population in 1650-1700 was around 3000 in summertime. Even more than there is on Svalbard today. There are almost no remains from the village but along the beach there are many blubber ovens where the blubber was boiled and distilled into oil. Ny-London is located across the fjord from Ny-Ålesund on the south shore of the island Blomstrandhalvøya. This place was built up early in the 20th century by the Northern Exploration Company (NEC) - led by a man called Mansfield, hence the name of the camp: "Camp Mansfield". Marble was produced from the rocks and shipped down to Europe, but due to the permafrost the solid marble blocks broke apart as they were held together by ice-filled cracks - and the marble was useless. At the north side of Blomstrandhalvøya (halvøya = peninsula) you can see the Blomstrand Glacier. In fact, Halvøya means peninsula and it used to be one - but the glacier has retreated and cut the island off. 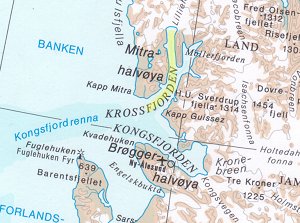 In the bottom of Krossfjorden we saw a beautiful glacier which it is possible to get very close to it. The front is spectacular and colourful and stretches 4 km across the bottom of the fjord. Signehamna and Nilspollen are located close to the glacier at the Northwest side of the fjord - a little bay where German troops placed a weather station during the war. On this afternoon the trekking group has left the Nordstjernen and stay for 3 nights in this first camp. Its the most northern tourist camp in this summer. This little village in Kongsfjorden is the worlds northernmost civil community. A former mining village which has become an important international research centre - mainly on the atmosphere and ozone layer but also geological, biological and glacial research is carried out here. Downtown Ny-Ålesund there is a café, a shop, a post-office and a museum. You will see the monument of Nobile down by the sea and when walking back along the beach towards Ny-Ålesund you will also see the monument of Amundsen and the mast from his and Nobiles transpolar expedition with the airship Norway. At the north side of Blomstrandhalvøya you can see the Blomstrand Glacier and the second Camp for the trekking group. They will stay here again for 3 nights.